Duende : literally means “ghost” or “goblin” in Spanish…traditionally used in flamenco music or other art forms to refer to the mystical or powerful force given off by a performer to draw in the audience…unspoken charm or allure

One of Spain’s greatest poets and dramatists, Federico Garcia Lorca was born at midnight on the cusp of 5th/6th June 1898 and was one of the first martyrs of the Spanish Civil War, killed by a Nationalist militia firing squad on 19th August 1936, his body buried in an unmarked grave which has never been found.

A leading light of the Spanish avant garde and a member of the influential group of poets and artists known as the Generation of ’27 (his passionate friendship with Salvadore Dali was intense enough to provoke Dali’s wife Gala into destroying many of Lorca’s letters in a fit of jealousy), Lorca’s plays and poems are characterised not only with the Surrealism which greatly influenced his writing, but by an elusive quality known in Spanish as Duende.

Duende is difficult to define. It can be literally translated as “elf”, or “magic” and relates to a type of earth spirit which in the folklore of Spain, Portugal and the Phillippines inhabits the Dionysian groves of wild forests, and the darkness of abandoned caves and wells. In art, particularly drama, dance and the music of Flamenco, it has come to mean a savage but ephemeral quality which possesses the work (and the artist) with otherworldly charisma and allure.

To understand the quintessence of Duende, there is no better reference than Lorca himself, who in a lecture he gave in Buenos Aires in 1933, describes it as ” a force, not a labour, a struggle not a thought”, “the mystery, the roots that cling to the mire we all know”, a creature who; “sweeping the earth with its wings of rusty knives”, “delights in struggling freely with the creator on the edge of the pit”. In contrast to the Muse, that creature of reason and the intellect, Duende “surges up from the soles of the feet”. It is everything that has “Dark sounds, behind which in tender intimacy exist volcanos, ants, zephyrs and the vast night pressing its waist against the Milky Way”.

What of the astrology of Duende? What might it look like in the birth chart? Again, Lorca gives us the key: Mystery and mire, death and darkness, volcanoes and the underworld – the imagery he employs to invoke this chaotic spirit is almost exclusively Plutonian.

Lorca’s birth chart has the Sun (creativity, identity) conjunct Pluto (death, tearing apart or destroying the self to be reborn) on the cusp of the 4th house; the ‘angle of the earth’ associated with roots, ancestry and all things hidden in and under the ground. There could not be a clearer astrological signature for a spirit who destroys in order to create anew and which might well revel in mortal combat with the poet on the edge of a well. 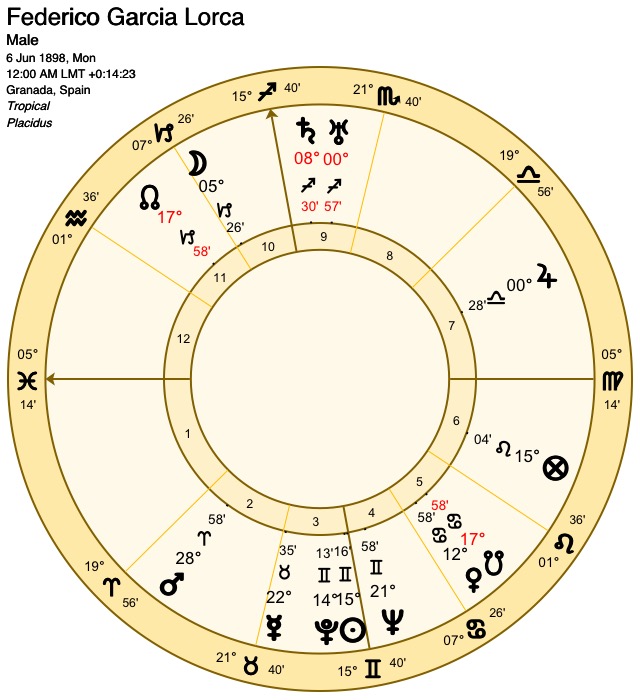 Although more usually a generational influence, when the the outer planets make their presence felt via contact with a personal planet or angle in a birth chart, the individual concerned can become a gateway for powerful forces, a spokesman for a generation or, perhaps, a channel for the inspiration of a god. Oliver St John in his book “Hermetic Astrology” writes; “Pluto conjunct the Sun transmits a magnetic force for transformation; the force is directed from the individual core of the person and so others tend to identify it with the person, although it is in reality an impersonal power”. With Lorca, (Sun/Pluto conjunction) the creative identification is total and permeates not only his poems and plays, but arguably his life as well.

Next time a song, dance, poem or performance speaks directly to your soul of dark mysteries and strange sorrows, wild woodland groves and the knife-edge of death on which we feel most alive, look in the chart for the signature of Pluto conjunct the Ascendant, Sun or Moon; Duende may be nearby;

Astrology by Louise Of Arabia www.louiseofarabia.com