This month’s Full Moon at 8 Sagittarius is exactly conjunct the warlike Antares (from Anti Ares; similar to, or rival of, Mars). Antares is one of the four Royal Stars of Persia, “The Watcher of the West”, linked with the death of the year in the seasonal cycle and also with the hour of sunset, when the Sun begins his journey through the underworld before his morning resurrection in the East.

Situated in the heart of the constellation of the Scorpion, Antares has a malefic and vengeful reputation, and is at his most destructive in the chart of one of the most infamous events of the Spanish Civil War, the bombing of the Basque town of Guernica. Carried out by aircraft sent by Hitler to support Franco’s troops, the bombing lasted for almost four hours and resulted in the near destruction of the town. The attack is widely considered to have been the first recorded instance of total war, where civilians are deliberately targeted.

In the chart of the bombing, Antares is conjunct Mars; increasing the martial character of the event and escalating its destructive nature. Mars is retrograde but still within the 5 degree orb of influence. Retrograde planets often have difficulty in expressing the best of their nature and this is Mars behaving very, very badly. The expansive North Node is close by: Paired with Mars and Antares, the Head of the Dragon becomes a ravening beast, devouring all in its path.

In Picasso’s chart, the Moon exactly conjunct Antares enabled him to reflect and articulate public outrage at the bombing of Guernica by creating one of the most powerful anti-war paintings in history. 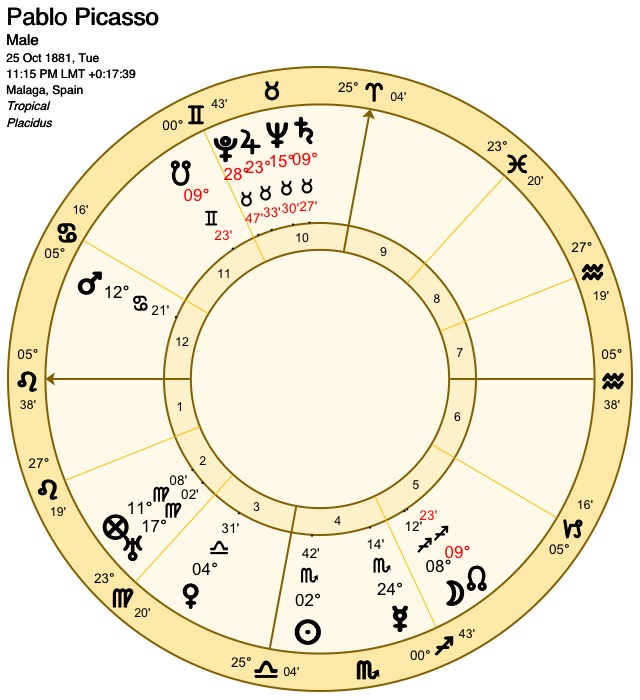 In his mural inspired by the event, the Moon in her role of woman and mother takes centre stage. Most of the figures in the midst of the carnage are women; wives and mothers on their way to market to buy food for their families. (The bombing occurred on a Monday, day of the Moon, and traditionally market day in the region). The Moon also governs our childhood and early family life: Picasso recounted that at age three, he was almost killed in an earthquake. He witnessed the near destruction of his village and this, and his subsequent fears for the health of his mother and (then unborn) baby sister later inspired the scenes of annihilation in Guernica. In contrast to more traditional depictions of battle which glorify conquest and victory, Picasso shines the Moon’s light on the dire consequences to the innocent. Working through Picasso’s chart, the Moon as bringer of peace and Lady of Grace is able to effect a miraculous alchemy, transmuting the destructive nature of Antares into an enduring call for peace.

Charts by Astrogold for Mobile

​A graduate of John Frawley's Horary Astrology Diploma Course, I work primarily with traditional Western Astrological techniques, but have also studied traditional and modern Western natal astrology, Renaissance Astrological Magic, Vedic Astrology and Chinese Astrology. I work full time as a consultant  astrologer, using techniques which give proven results and have stood the test of time.  My approach to astrology is rigorous and practical – the result of over twenty years of study and experience in a working, living tradition.  ​   View all posts by louiseofarabia