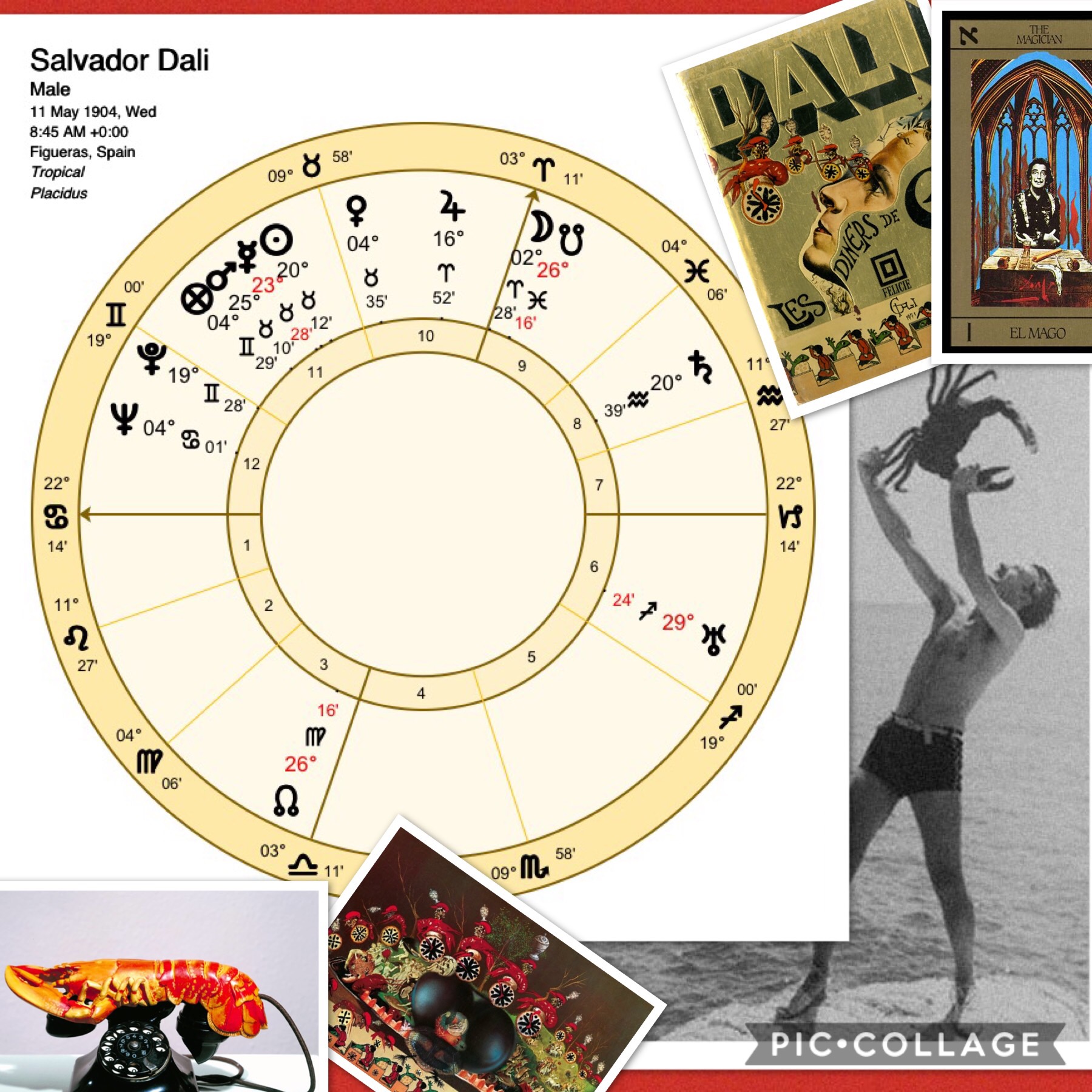 Showman of the surreal Salvadore Dali was born with Sun in Taurus, a sign renowned for an appreciation of the finer things in life – including a love of fine dining. Dali claimed that he was drawn to the pleasures of cooking from an early age, saying that “Beauty should be edible – or not at all”: His dedication to the culinary arts bore typically exotic fruit when he published “Les Diners De Gala”; a lavish compilation of fantastical recipes dedicated to the wife he adored, featuring creations designed to challenge the skills and palate of the most adventurous cook. This is not a cookbook for the faint of heart: The lucky diner can look forward such delights as frog pasties, a modern take on the Chinese delicacy “Thousand Year-Old Eggs” and an eel-based triumph called “Conger of the Rising Sun”.

“The difference between false memories and true ones is the same as for jewels: it is always the false ones that look the most real, the most brilliant” – Salvador Dali

In Dali’s recipes, just as in his paintings and sculptures, crustaceans are a recurring motif. He was fascinated by the contrast between the soft innards of crabs and lobsters and their armour-like shells: The sign of Cancer (the crab) was rising at Dali’s birth, giving a nature and outward identity which is intuitive, empathic and very sensitive to the moods of others but also adept at hiding their own emotions behind a protective mask or ‘shell’. A powerful (often photographic) memory is one of the gifts of this sign, which Dali used to advantage when recalling the dreams which inspired many of his most famous works.

The shyness usually associated with a Phlegmatic/Sanguine temperament is not immediately obvious in Dali’s case; his great fame and the enduring popularity of his work is likely the result of the Moon’s placement in Aries on the 10th house cusp. The Moon on the Midheaven usually promises a life lived in the public eye, while attention-getting Aries shouts ‘look at me!’ The Moon shining a spotlight on Aries – key phrase ‘I am’, is also beautiful astrological shorthand for one of Dali’s most famous paintings “Metamorphosis of Narcissus’.

Nevertheless, there was a strongly spiritual and deeply contemplative side to Dali, shown by his fascination with the world of dreams, fantasy and the occult, never more evident than in the creation of his own Dali Tarot deck.

The Phlegmatic nature can often find intoxicants a powerful distraction, but Dali appears to have avoided this, once famously stating; “I don’t do drugs. I am drugs”. The Phlegmatic/Sanguine type is highly adaptable but needs to work on maintaining focus and direction Harmonious relationships are highly important to the happiness of the Phlegmatic/Sanguine; many of his most famous pieces were produced following his meeting with his muse and future wife, Gala. Nine years his senior (Capricorn on the 7th house cusp can often indicate an older partner , Gala took charge of the day-to day management of his life, providing him with the tranquil and structured environment he needed to produce his best work. So important was his marriage, that Dali often acknowldged its significance by signing his artwork with both his and Gala’s names..

Mars is exactly conjunct Algol; the brightest star in the severed head of the Gorgon Medusa. As John Frawley writes in his article on Fixed Stars in issue 22 of ‘The Astrologer’s Apprentice’ (www.johnfrawley.com); Algol is a warning against the potentially dangerous consequences of untrammeled desire; ”Medusa can be read as the seduction of desire for all the things of the material world” which kills the soul, reducing it to stone. However, significant artistic achievement is possible when Algol’s powerful desire nature is channeled creatively. From Medusa’s blood sprang Pegasus, whose “wings allow him to aspire towards the heavens”; the symbol of aspiration born from desire and “the Hippocrene from which poets draw their inspiration”.

Mars is disposited by Venus, goddess of the arts, dignified in her own sign in the 10th, allowing Dali to positively channel the influence of Mars and Algol into works of art which fascinate us even as they speak to our hidden fears and desires.The fixed star Algol is also linked to intoxication; both the name Algol and the word alcohol are thought to be are derived from the same root, the Arabic “Ra’s al Ghul” (the demon’s head).

Which brings us back to the pages of “Les Diners De Gala”, and Dali’s recommended ‘remedy for sobriety’; the “Casanova Cocktail”: A heady potion not for the fainthearted,  as a birthday toast to Dali there can surely be no better choice.

The juice of 1 orange

“This is quite appropriate when circumstances such as exhaustion, overwork or simply excess of sobriety are calling for a pick-me-up. Here is a well-tested recipe to fit the bill. Let us stress another advantage of this particular pep-up concoction is that one doesn’t have to make the sour face that usually accompanies the absorption of a remedy. At the bottom of a glass, combine pepper and ginger. Pour the bitters on top, then brandy and “Vielle Cure.” Refrigerate or even put in the freezer. Thirty minutes later, remove from the freezer and stir the juice of the orange into the chilled glass.

Drink… and wait for the effect.

It is rather speedy.”

Title inspired (with thanks) to Sylvian, Karn, Jansen and Barbieri