This month’s first quarter Moon makes an exact square to the Sun from the degree of 23 Pisces 27 on 15th December at 11:49 am GMT and occurring in the 28th Lunar Mansion, known in Arabic as “Batn al-Hut”: The Belly of the Fish. As might be expected from the last in the cycle, this Lunar Mansion carries with it associations with gathering-in of the harvest and reaping the results of work that has gone before. 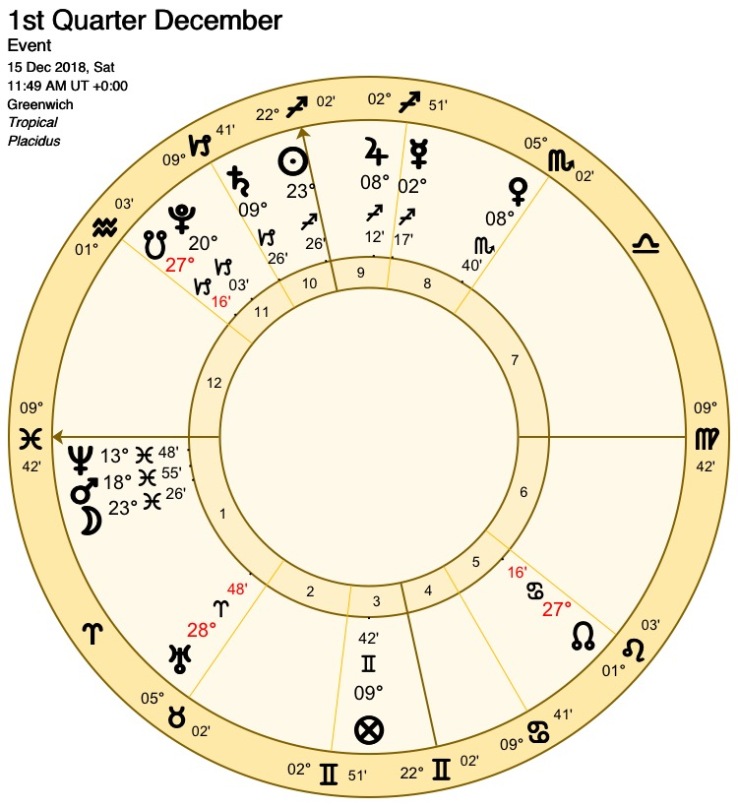 The 9th century grimoire of astrological magic “Picatrix” incorporates references to the correspondences of Pisces, Venus (who is exalted in this sign, and Mars (who rules the decan most closely allied to this Mansion, when it says; “make images (talismans) to increase merchandise, besiege cities, increase harvests, to get rid of things and to destroy an area, to make treasures be lost, to travel safely by wagon and safely return, to cause peace and concord between man and wife, to make the incarceration of captives firm and to inflict evil on sailors on the sea”.

The primary image of this Mansion is a giant fish, swimming amongst a shoal of its smaller fellows, whilst fishermen cast their nets to harvest the abundance of the sea. The fish is a creature of the water from which all life springs (the symbol for Pisces is believed to have originated from the Babylonian zodiac, where the two fishes were associated with the goddesses Annunitum and Simmah, who symbolised the rivers Tigris and Euphrates), hence its association with material and spiritual sustenance. The name Annunitum is believed to have been closely associated with Ishtar, the Babylonian Venus. The 28th Mansion was originally marked by stars in the constellation Andromeda, which according to Ptolemy is of the nature of Venus. Additionally, Venus is exalted in this mansion (at 27 degrees Pisces) and is herself traditionally a bringer of love, wealth and the finer things in life. Her Hindu counterpart, Lakshmi, is the goddess of beauty, wealth and prosperity: In Hindu culture, a wife may traditionally be referred to as ‘the Lakshmi of the house’ and is considered to have the power to attract wealth and prosperity into the home.

In the Chinese practice of Feng Shui, fish are believed to bring wealth-luck – not to excess, but enough to live happily and without worry. A tank of goldfish or koi carp, (or an image depicting them) can often be seen in Chinese places of business to draw in prosperity.

Water is also symbolically the realm of mystery and spirituality; the Bible relates how Jesus by the lake of Gennesaret exhorted Simon, James and John to become ‘fishers of men’ (Luke 5:1), there is also reference to the miracle of the feeding of the multitude with five loaves and two fishes (Matthew 14:13) and the tale of Jonah who was swallowed by a giant fish and released only when he repented for reneging on the task set for him by God (Jonah 1:11): The themes of abundance, gratitude and the obligation to nourish the self and others, both materially and spiritually, are all contained within the 28th Lunar Mansion and also within the tarot card linked with the final decan of Pisces; the 10 of Cups.

The Hermetic Order of the Golden Dawn called the Ten of Cups “The Lord of Perfected Success”: Mars acting through Pisces supplies the will and drive to turn inspiration into reality. The famous Rider Waite Smith deck depicts a scene of domestic contentment overarched by a miraculous rainbow – combined images of material and spiritual happiness, and a message that we should not ignore one in favour of the other. There is a Buddhist tale of a giant fish who was so enamoured with the beauty of his wife that he failed to see the fisherman’s net until he had swum into it and was caught. His life was saved by an enlightened man who told him; “You foolish fish! If I had not seen you today, you would have been killed. Your blind desire was leading you to continued suffering. From now on, do not let yourself be trapped by your own desires!”.

Chart by Astrogold for mobile

The Mansions of the Moon (Christopher Warnock)

The Fixed Stars and Constellations in Astrology (Vivian E. Robson)